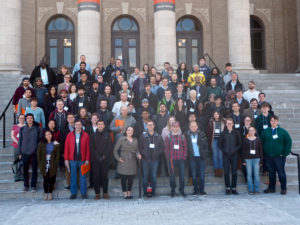 The conference consists of two plenary talks and 15-18 graduate student talks given in parallel sessions.  All graduate students at any stage of their graduate education are welcome and encouraged to give a 20-25 minute talk.  Talks may be expository or on the student’s research.

We will have an informal gathering at the Inn Complete on Friday, March 23rd. We will have pizza and wings starting at 6:30. The Inn Complete is the graduate student bar on campus, mostly known for cheap beer, which you can buy. (We will also serve some non-alcoholic beverages). We hope you can join us! See the South Campus map for directions.

Dr. Nahmod is a Professor of Mathematics at the University of Massachusetts, Amherst. Dr. Nahmod is best known for her work on nonlinear partial differential equations and non-linear Fourier analysis. After receiving her Ph.D. from Yale University in 1991 under he supervision of Ronald R. Coifman, she was an ARC research fellow at Macquarie University, Sydney Australia, followed by faculty and research positions at the University of Texas at Austin, the Mathematical Sciences Research Institute at Berkeley, CA and the Institute for Advanced Study at Princeton, NJ before coming to work at the University of Massachusetts Amherst in 1998. Dr. Nahmod was the Sargent Faull Fellow at the Radcliffe Institute for Advanced Study at Harvard in 2009-2010, and a Simons Foundation Fellow in 2013-2014. In 2015, Dr. Nahmod held a Simons Research Professorship at the Mathematical Science Research Institute in Berkeley, CA where she also co-directed an international research program in partial differential equations. In 2015, Dr. Nahmod was named Fellow of the American Mathematical Society. In 2015-2016, she was selected the Spotlight Scholar at the University of Massachusetts Amherst and in 2016-2017 received the Award for Outstanding Accomplishments in Research and Creative Activity at UMass Amherst. Dr. Nahmod’s research has been continuously funded through several grants from the National Science Foundation. Dr. Nahmod’s talk will be…

An overview of randomization and dynamics in nonlinear PDE
Abstract: In this talk we first discuss some basic definitions, estimates and well-posedness for dispersive PDE using deterministic techniques (e.g. Fourier and harmonic analysis). We then show how further results – not available using only deterministic techniques – can be obtained by injecting randomness in the set of initial data and using powerful but still classical tools from probability as well. These ideas go back to seminal work by J. Bourgain on the invariance of Gibbs measures associated to dispersive PDE. We will take this journey by concentrating on the nonlinear Schrödinger equation as a case study.

Dr. Emily Riehl received a Bachelors Degree from Harvard University and a Masters Degree from the University of Cambridge before completing her Ph.D. at the University of Chicago in 2011 under Dr. Peter May. She was also a Benjamin Pierce Postdoctoral Fellow and NSF Postdoctoral Fellow at Harvard University before becoming an Assistant Professor at Johns Hopkins University. Dr. Riehl’s research centers in a variety of topics in category theory related to homotopy theory and serves on the editorial boards for Cahiers de Topologie et Géométrie Différentielle Catégoriques, Homology, Homotopy, and Applications, and the Journal of Homotopy and Related Structures. She is the author of “Categorical Homotopy Theory” and “Category Theory in Context”. Dr. Riehl received a Harvard University Certificate of Teaching Excellence in 2014 and 2015 and was awarded the Joel Dean Award for excellence in teaching in 2017. Dr. Riehl has appeared several times in the media: being interviewed by the AMS and even appearing on Science Friday with Ira Flatow! Sh is also a co-founder for Spectra and will be on the “Out in Mathematics: Professional Issues Facing LGBTQ Mathematicians” panel at the 2018 Joint Meetings in San Diego. Dr. Riehl’s talk will be…

What is a Universal Property
Abstract: The aim of this talk is to explain what it means to say that the natural numbers is the universal discrete dynamical system, that the Sierpinski space is the universal space with an open subset, or that the complete graph on n-vertices is the universal n-colored graph, by giving a precise meaning to mathematical expressions that at first appear somewhat ad hoc. The meaning of universal can take one of two dual forms. In one case universal construction are commonly dubbed free constructions, with the dual notions less commonly referred toas cofree. Time permitting, well explain what this has to do with the Yoneda lemma.

Here is a list of currently registered participants. (Updated weekly.)

More from this Section